Genre 2: Posters
The purpose of this genre is to have at least one piece that conveys emotions or imagery.

Both of these pieces are inspired by one of Margie's powerful monologues in Good People. 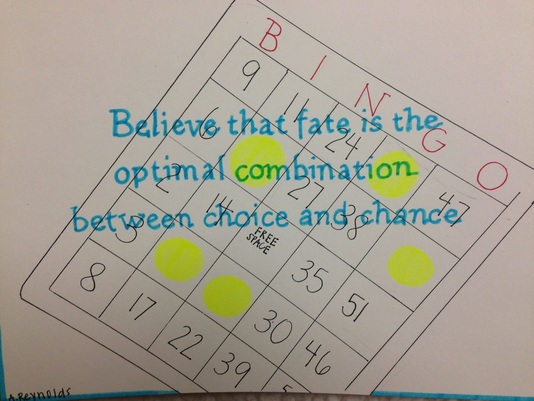 This motivational poster represents the power of choice and chance. This poster plays on the theme of Bingo, the game played throughout the play Good People. It also brings up a new concept of how fate is not only controllable but how there are two main factors in determining fate: choice and chance.
This tagxedo was made based on the following monologue:

What choices did I have? I chose to take care of the baby. Because that’s what people did. I got a job. I got a bunch of jobs, in fact. And every one of them sucked, because what other job could I get? Not much of a choice there either, I’m afraid. And yeah, I lost most of those jobs. Usually because I was late. I didn’t choose to be late. Shit happened, that made me late! Sometimes it was Joyce. Sometimes it was the T. One time I got my car taken. Why’d I lose the car? Because I missed a payment. Why’d I miss a payment? Because I had to pay for a dentist instead? Why’d I have to pay the dentist? - I’ve done this a hundred times in my head, Mikey. I think you should hear it too. Why’d I have to pay the dentist? Because I didn’t have insurance, and I cracked a tooth and ignored it for six months, until an abscess formed. Why’d I crack a tooth? Because one night I thought I’d save a little money, and skip dinner! But I got hungry and decided to snack on a piece of candy brittle. And that’s all it took - a piece of fucking candy brittle, and I was out of a job again.

And that’s how it always is. And if it’s not the candy brittle then it’s Joyce’s medication, or it’s my phone getting cut off, or Russell Gillis breaking in and stealing my goddamn microwave. And you wanna tell me about choices? While you sit up here practically breaking your arm patting yourself on the back for all you’ve accomplished. Lucky you. You made some wise choices. But you’re wrong if you think everyone has ‘em.
In fact, the only real choice I ever did make was dumping you. And yeah, I’ve thought about it a million times since: “What woulda happened if I hadn’t dumped Mikey Dillon?” Maybe I wouldn’t have ended up with Gobie, or maybe I woulda finished school, or maybe this coulda been my house.